The Confederate battle flag, symbolizing honored Southern heritage to some and racial hatred to others, was removed from South Carolina’s Capitol grounds on Friday, a day that many thought would never come in the state that was the first to secede at the start of the Civil War.

As a crowd of thousands looked on, the battle standard was lowered and removed from the flagpole in front of the Statehouse. In keeping with the promise by state officials, the ceremony was dignified, with a seven-officer Highway Patrol honor guard marching toward the flag and lowering it from its 30-foot pole.

The Confederate flag was lowered from the grounds of the South Carolina Statehouse on Friday, marking a stunning political reversal in a state where many thought the rebel banner would fly indefinitely.

Two troopers rolled the flag and tied it with a string, It was then handed to a black trooper who led the contingent across the lawn to Allen Roberson, director of the Confederate Relic Room and Military Museum where the flag will be displayed. As befitting its social value, the flag was transported to the nearby museum in an armored vehicle.

There were no speeches, but members of the state government’s top echelon, led by Gov. Nikki Haley, looked on. The crowd burst into chants of “take it down” followed by “USA, USA,” and “Na, Na, Na, Na … hey, hey, hey, goodbye” as the flag was lowered.

After days of charged political debate leading up to lawmakers’ vote to remove the flag, Haley signed the historic bill into law Thursday.

“For years, I have waited for this moment,” said Tameka Wood, 37, a black high school English teacher who stood under the shade of a magnolia tree in a long dress emblazoned in stars and stripes. 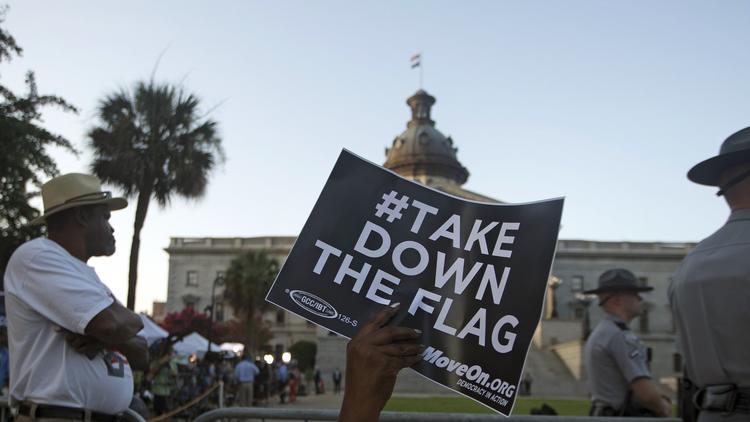 “South Carolina was the first state to secede from the union and now it’s time to come back into the fold,” said Wood, who lives in Baltimore but attended college in Columbia. “We are one America.”

The flag flew over the dome of South Carolina’s Capitol in 1961 to celebrate the 100th anniversary of the start of the Civil War. It stayed as a protest to the African American civil rights movement that shattered Jim Crow segregationist laws across the South.

After complaints from civil rights leaders, the battle flag was moved in 2000 from the dome to its most recent location at the Capitol where it has been a source of friction ever since.

The killing of nine parishioners, including a state senator, in a famed black church in Charleston last month spurred soul-searching and prompted officials to call for the removal of the flag. The suspected gunman had been photographed with the flag and other Confederate symbols and police said he espoused racial ideologies.

The clamor to remove the contentious symbol built after the June 17 massacre of nine black parishioners, including state Sen. Clementa Pinckney, at Emanuel African Methodist Episcopal Church in Charleston. The suspected gunman, Dylann Roof, 21, is being held on nine murder counts and other charges. Roof had been photographed with the flag and other Confederate symbols and police said he espoused racial ideologies.

“When the Klan tortured my great-great grandfather, they wrapped him up in that flag and lay him on a railroad track and waited for a freight train to run over him,” said Phyllis Lloyd Harris, 61, a retired special education teacher from Camden, S.C. “That’s my heritage. To see this flag come down closes that era for me.”

Brenda Bowden, a retired middle school science teacher, traveled an hour and a half from Fort Mill, S.C., to watch the flag come down.

“When I think back on all the hardships that my family had to endure, I am very proud to arrive at this moment,” Bowden said.

She added her ancestors were slaves during the Civil War and poor sharecroppers during the Jim Crow era. As a 13-year-old schoolgirl, she said, she was part of a generation that integrated schools in Bamberg County. Taking the flag down, she said, is just one more step toward progress.

“That flag,” she said, “has always been a symbol of hate.”

Over the years, many in South Carolina have tussled over the meaning of the Civil War flag. Although some see it as an emblem of an era when African Americans were chained, whipped and traded as chattel, others consider it a celebration of heritage and respect for the up to 20,000 soldiers who died fighting for the state and the Confederacy.

On Tuesday, state senators passed a bill calling for removal of the Capitol flag by an overwhelming vote of 36 to 3. But the measure’s passage was tested in the House as a small group of Republican legislators proposed 70 amendments in an effort to delay or derail the legislation. A larger bipartisan group committed to taking down the banner repeatedly batted down their proposals.

Finally, after more than 15 hours of charged and emotional debate about the origins and nature of the Civil War and how its legacy should be preserved, the House passed the bill in a 93-27 vote and Haley signed it into law Thursday afternoon.

On Friday, a steady stream of spectators carrying lawn chairs and coolers flocked to the Capitol — which to this day bears brass bolts in the form of Confederate stars in its granite walls to mark the damage inflicted by Union Gen. William Tecumseh Sherman’s cannon fire during the Civil War.

“This is a very sad moment,” said Michael Lewis, 46, a white protester who had driven down from Southside, Va.

“This flag is so much more than a symbol of hate,” Lewis said. “We’re losing an ability to educate people about the flag and what it really represents. Hiding it and tucking it away is not going to stop all the social dysfunction.”

Amid all the diverse perspectives, there was one source of agreement: Those assembled were witnesses to a moment of history.

The flag will join a collection that includes Confederate and union weapons, ammunition, uniforms, private letters from a 3rd South Carolina Volunteer Infantry lieutenant  to his father and sister, excavated relics from Sherman’s attack and a diorama depicting Columbia in flames.