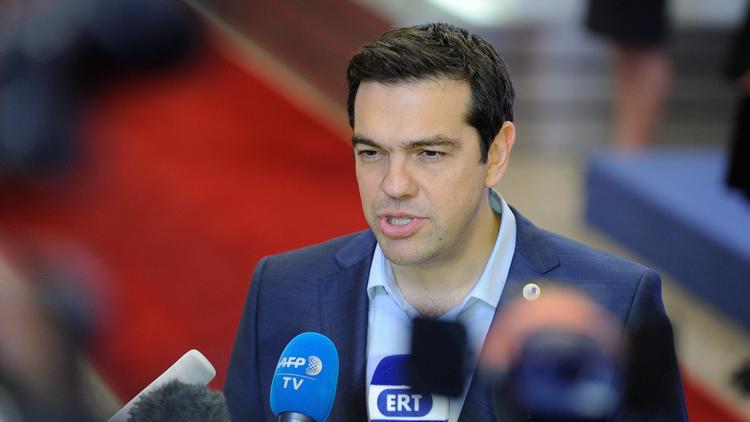 After an all-night negotiating marathon, European leaders agreed Monday to launch talks with Greece on a massive new $96-billion bailout to rescue the country from imminent bankruptcy, but only as long as Athens within 72 hours passes a raft of new laws aimed at reforming the Greek economy.

The new legislation would entail more austerity cuts, tax hikes, privatization of state assets and pension reforms — measures that the left-wing government of Greek Prime Minister Alexis Tsipras considers anathema. But faced with the imminent collapse of Greece’s banks and the country’s possible expulsion from the Eurozone, Tsipras agreed to press for their passage in exchange for a potential bailout.

Though an actual rescue package will take weeks to hammer out, the immediate effect of Monday’s agreement will be to prevent the failure of Greece’s financial system. Greek banks are days, possibly even hours, away from running out of cash; the new agreement will allow the European Central Bank to release more emergency funds to keep them afloat.

European finance ministers will also hold an emergency session this week to discuss an interim loan to Greece to meet its immediate financing needs. Athens needs about $8 billion by the beginning of next week to pay its bills, and an additional $6 billion by mid-August.

“We made the right decision for our country and our financial system,” Tsipras told reporters in Brussels. “It has been a tough battle for the last six months, and we fought until the end to keep our nation standing on its feet.”

Monday’s agreement also wards off, at least temporarily, the specter of a “Grexit,” or a Greek exit from the euro currency union. Such an event would have a catastrophic effect not just for the Greek economy but for the image of the European Union, which regards the euro as its most important symbol of greater unity and integration on a continent ravaged by two world wars.

“We would not accept any form of Grexit. There is no Grexit,” Jean-Claude Juncker, the president of the European Commission, said tersely after the talks in Brussels, which began Sunday afternoon and took more than 16 hours.

Leaders went into the talks deeply divided. Countries such as Germany and the Netherlands took a hard line against Athens; a German briefing paper, leaked to the media, suggested that Greece take a “time out” from the euro and introduce a new currency.

But France led the charge to keep Greece within the fold, warning that ejecting Greece from the Eurozone would inflict untold damage to the reputation of the EU.

“It is Europe that is at stake,” French President Francois Hollande said before talks began.

Still, Tsipras was forced to make major concessions to get his European partners to consider negotiating a new bailout, which would be Greece’s third in five years. Many European leaders had complained of a lack of trust in Tsipras’ government and insisted on driving a hard bargain.

In addition to the laws that must be rushed through the Greek Parliament by Wednesday — which could meet with stiff resistance from members of Tsipras’ own leftist Syriza party — Tsipras agreed to put up to $55 billion worth of Greek state assets into a special trust fund, assets that could be sold off or otherwise monetized.

The money generated from the fund would be earmarked for repaying the $28 billion needed to recapitalize Greek banks. Leftover proceeds would go toward paying down Greece’s staggering load of public debt and investing within the country to stimulate the economy.

Germany, Greece’s biggest lender, had originally demanded that the trust fund be located offshore, perhaps in Luxembourg, which many observers said would be a humiliation for Greece to have some of its most valuable assets parked outside the country, under others’ supervision. But European leaders ultimately agreed to keep the trust fund within Greece.

In a victory for Tsipras, his Eurozone counterparts also appeared to agree to some form of eventual debt relief for Athens, which Berlin has strongly resisted.
German Chancellor Angela Merkel said Monday that, if Greece lived up to its reform commitments and the other demands of the agreement, creditor countries would discuss ways to relieve Athens’ debt burden — for example, by extending repayment schedules.

Though welcomed by investors, Monday’s agreement could still get wrecked on the shoals of national politics within the Eurozone.

If Tsipras loses too many of his own lawmakers in the struggle to get legislation passed by Wednesday, forcing him to rely on opposition politicians, his government could fall. That would spur fresh elections and additional instability and uncertainty in Greece.

And even if he succeeds in pushing the legislation through, parliaments in some of the other Eurozone countries still must give their approval for bailout negotiations to begin. That could prove tough in countries such as Finland, where many politicians are adamantly opposed to any new rescue package for Greece.

Merkel, the Eurozone’s most powerful leader, also faces dissent within her ranks. Some officials regard another bailout for Greece as throwing good money after bad and have openly called for Athens to be thrown out of the Eurozone. But she is expected to prevail in a vote in the Bundestag.

In Frankfurt, Germany, a decision is expected later Monday by the European Central Bank on expanding its lifeline to the Greek financial system.

Greek banks have been closed for two weeks and cash withdrawals have been limited to prevent a run on their perilously low supply of cash. Regular business has ground to a halt, further damaging an economy that has already shrunk by 25% over the last several years.

A cash infusion by the European Central Bank would allow banks to reopen gradually, but some capital controls are expected to remain in place for weeks.